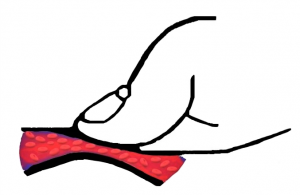 illustration above shows the thumb detecting the VAS

The VAS (Vascular Autonomic Signal) was first named the RAC (réflexe auriculo cardiaque) by Dr. Paul Nogier. It is also known as Nogier’s Pulse and was discovered in 1966. The VAS is a reflex that is detectable by palpitation of the radial artery by stimulation outside to the body. This response is a change in the amplitude of the pulse. The VAS is measured by counting pulsations during the time the pulse becomes fuller or collapses. It is measurable in both humans and animals. The VAS can be viewed as a unique form of dynamic extension to the TCM (Traditional Chinese Medicine) pulse.

John M. Ackerman, M.D., had this to say about the VAS

“When the doctor palpates the radial artery of a patient, they are opening a channel, or circuit, that connects them into the feedback loop of the body as it is picking up and responding to stimulations of any new electromagnetic information”.